Aiming systems have long been a topic of debate amongst many pool players. The biggest point always discussed is an aiming system provides a better way to play pool compared to just using "Feel". Many of the professional players of today's game will tell you feel is the way to go. The player gets down on the shot and trusts their body's muscle memory to properly execute the shot. Now this is where as an instructor I saw the challenge. How do you teach feel? How do you teach muscle memory? There has to be a way to teach using visuals to create reference points to apply to aiming. Having reference points and using a system is the much-needed bridge over to just playing by feel and muscle memory.

There are lots aiming systems out there. The key is finding one that works with your learning style.

Here's some of the most popular systems to date:


I've studied all of these systems in depth. All are extremely useful systems and I recommend you at least explore these other systems. Every aiming system in pool can provide a little bit more knowledge even if you don't fully use the system. For a long time, I was a fractional aimer, and then began using CTE Pro One developed by Stan Shuffet. CTE is by far the most advanced system made for pool. It uses a lot of sight lines, pivots, and looks to create concrete visuals when down on the shot. This is what got me thinking on developing a simpler system! There had to be a way to make aiming in pool easier... I looked at the fractional system and liked that it split the object ball up into sections for cut shots, but how do you teach a brand-new player to look at an invisible theoretical fraction slice on the object ball? I used to teach students the Ghost ball system. Imagining an invisible cue ball as it contacts the object ball. You simply imagine the invisible Ghost ball’s spot and replace it with the real cue ball. This system worked well as it's simpler than the fractional system but I still wasn't satisfied! 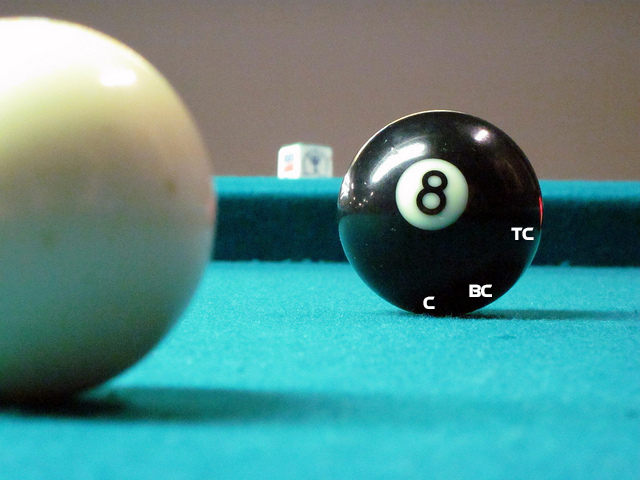 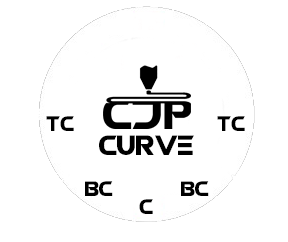 The CJP Curve aiming system takes three points on the object ball. The player is always looking at the bottom of the object ball regardless of cue tip position on the cue ball. The "C" is for center. This location is where the bottom of the cue ball touches the table. This is used for straight in shots. The "BC" mark designates the Bottom Curve. This location is found by looking at where the object ball's spherical shape begins to leave the felt on a curve. The Bottom Curve will be used for most of your common cut shots. The "TC" mark designates the Top Curve, this is used for very thin cuts, and edge-to-edge shots. The Top Curve ends at the middle of the object ball.

The Curve system gives 3 easy to spot aim all shots in pool. There is no more guessing, or using an imaginary aim point.

Here are some examples using some diagrams I added some markups on. Credit to the original creator of the diagrams Dr. Dave @billiards.colostate.edu 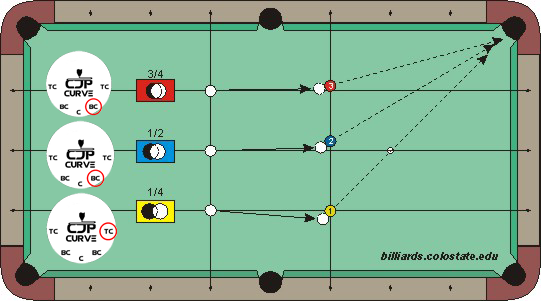 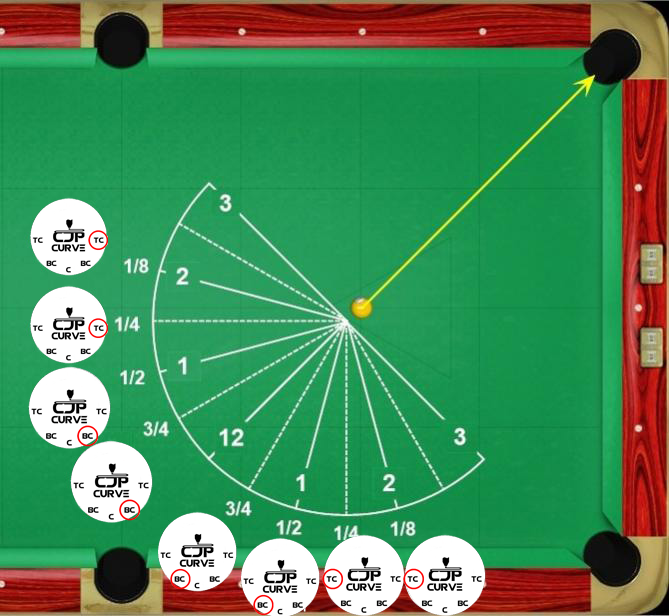 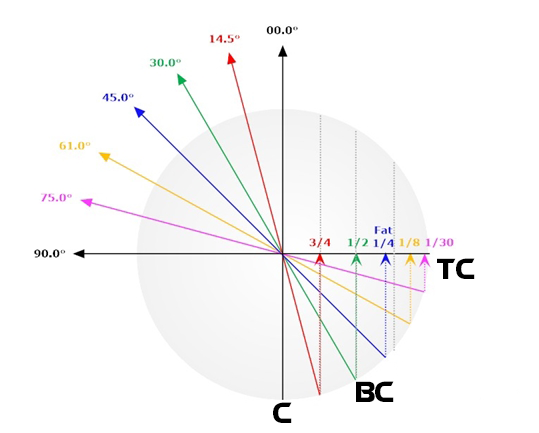 As shown in the diagrams above the thinner the cut the higher on the object ball's curve the player looks to aim. 1/4 Cut angles use the Top Curve. The most interesting thing about using the Curve system is that 1/2 & 3/4 cuts are treated exactly the same! The player lines up aiming their cue ball at the Bottom Curve marker on the object ball. This phenomenon blew my mind as couldn't believe how reliable and easy all cut shots became!


Adding spin to the system works too! A tip of spin with a low deflection shaft will work just the same! Any amounts of extreme spin outside 1 tip require a change in aim point on the Curve to accommodate for spin induced throw. Any extreme spin starts to add cue deflection and gearing into the mix. Learning how your equipment works with extreme spin and correlating it to the Curve system is something for the advanced player to work in. The curve system works best with no side spin. Follow, Stun, and Draw shots work perfectly fine.

IF ON MOBILE ZOOM IN ON PICTURES TO SEE WHERE TO AIM! 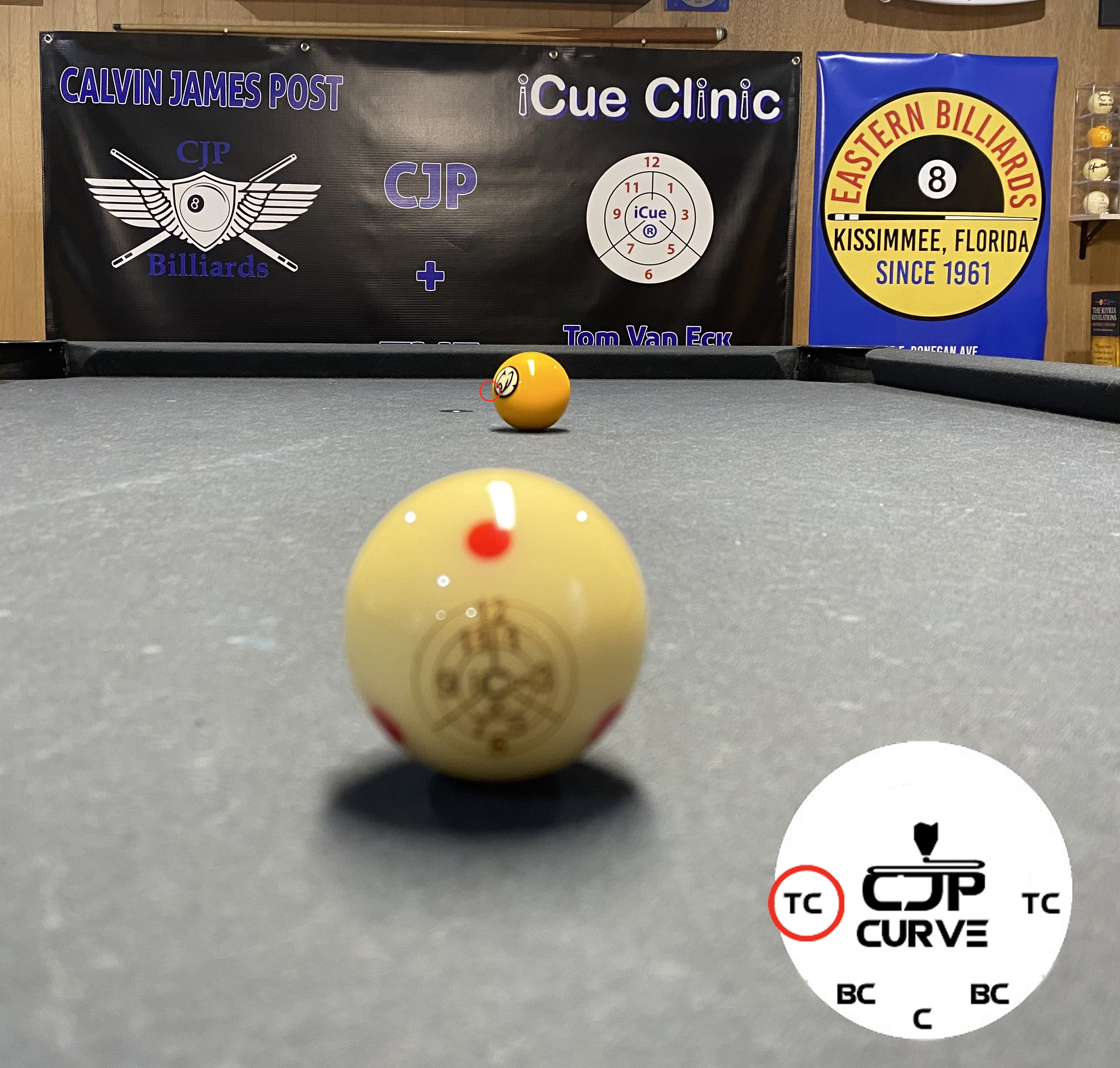 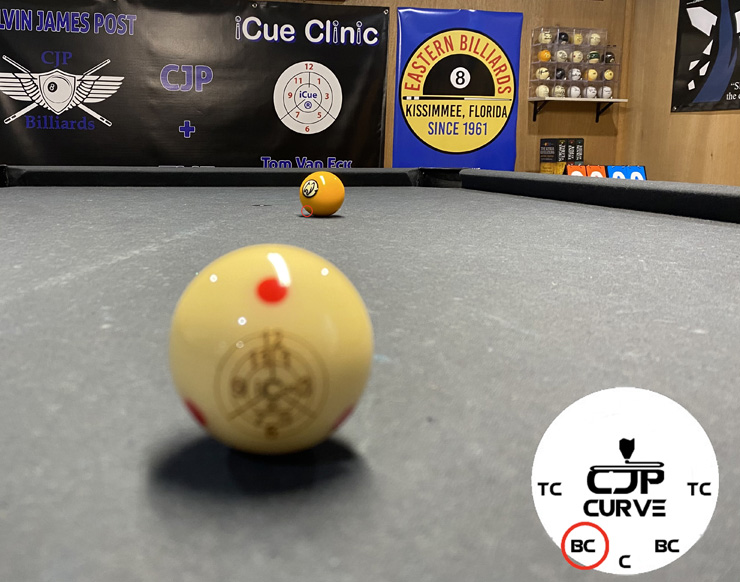 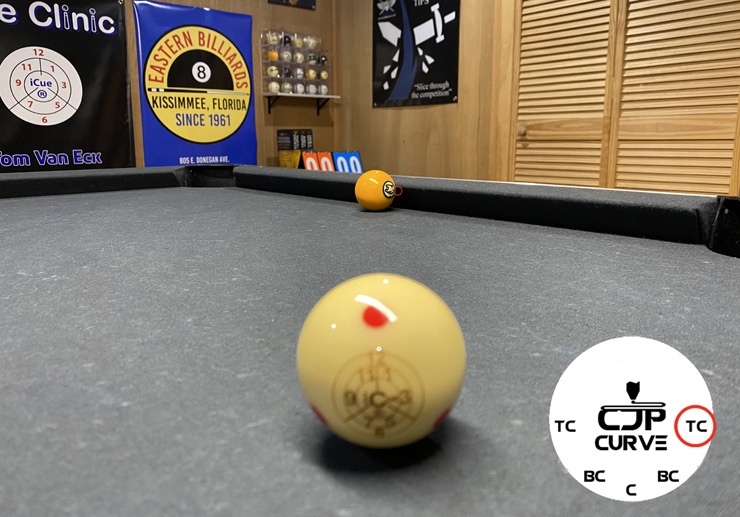 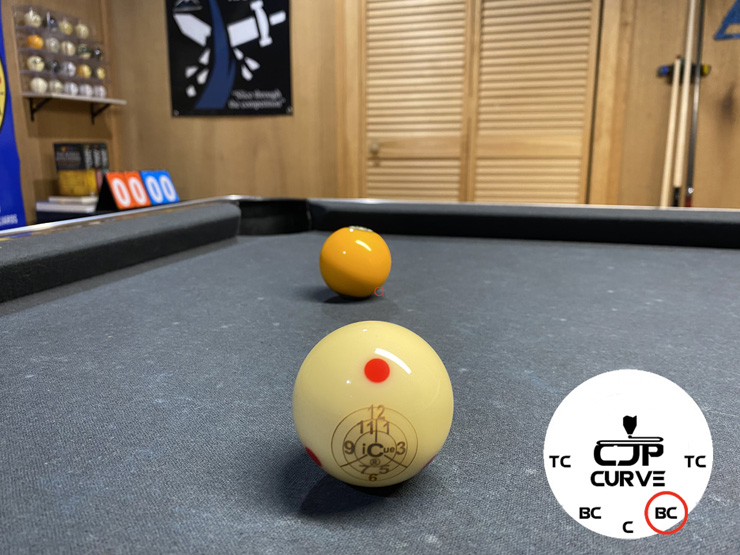 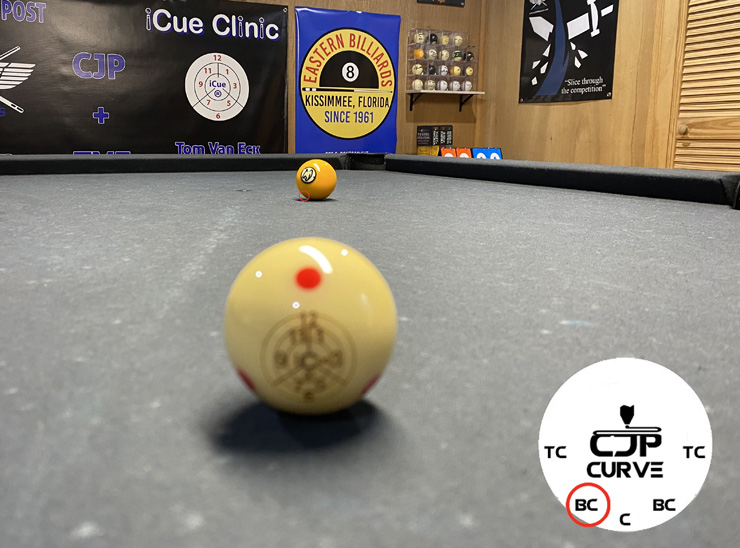 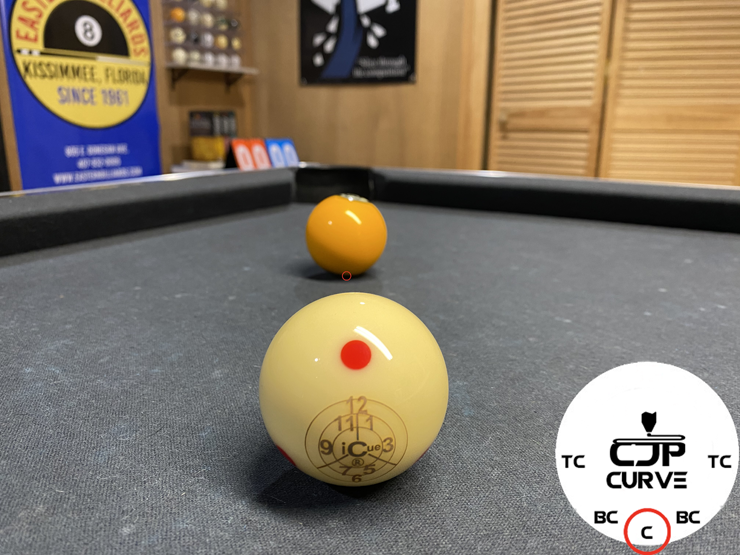 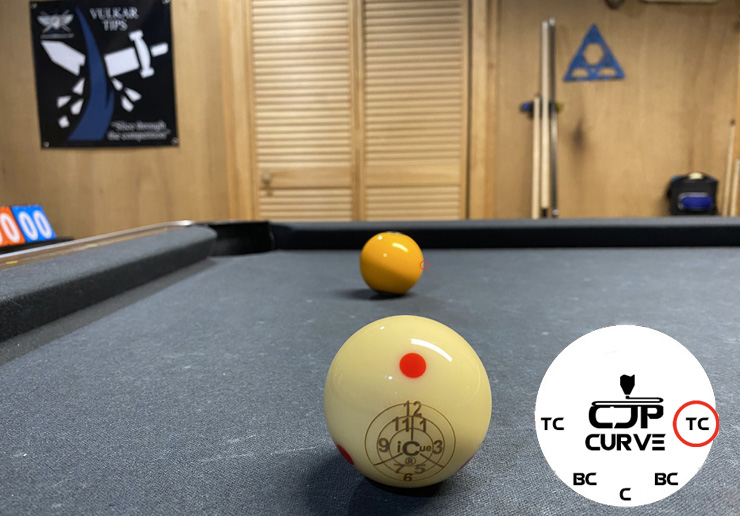 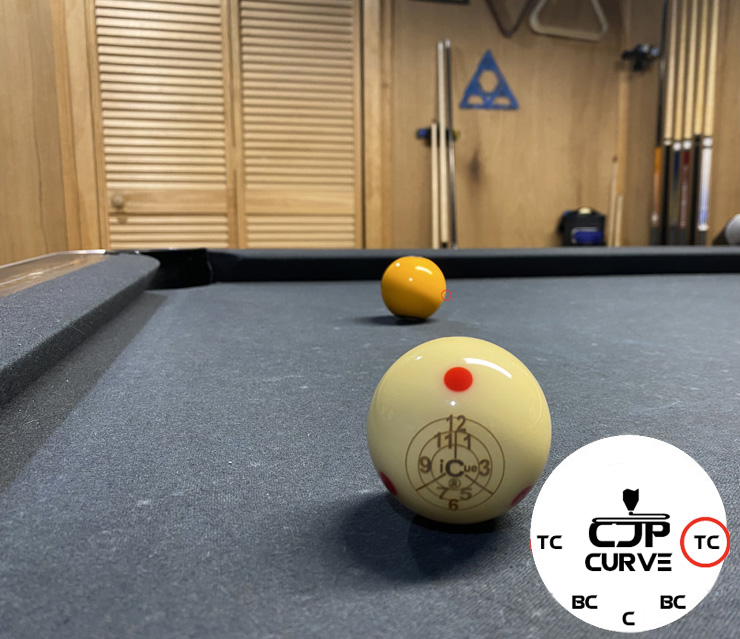 The pictures above show exactly where to look on a variety of shots. Line up your tip on any of the nine iCue tip locations and look at the proper point on the object ball's curve. Aiming is really this simple! Now the Curve system isn't perfect, but it's a wonderful refrence system to use when trying to find the contact point, or predict the tangent line the cue ball will travel after contact. Give it a shot! let me know what you think!